I just came back from 10 days in Seattle, 5 of those days spent in the Washington Convention Center at the Gender Odyssey Conference, an epic gathering of transgender people and the ones who love them.

This was the biggest year yet: over 1,000 attendees. You could certainly feel the energy, the depth, and the commotion.

Here are 15 things that rocked my world.

It’s pretty much the entire point of the conference. Yet it’s not just transgender talk; we’re here to talk about Gender, in general, for everyone.

What is Gender? What does it mean to be a man or a woman?

Most folks go their whole lives without giving Gender a second thought. Lucky for them, we’re here to change that.

In the many trans conferences I’ve attended, I kept seeing this old guy walking around, and wondered what he was doing there. Well, “this old guy” is none other than Jude Patton, who transitioned over 40 years ago!

I finally got to hear Jude’s story in one of the sessions. He’s been a vocal advocate of the trans community for longer than most of us have been alive, in a time when it was extraordinarily dangerous to speak out.

Despite having made history himself, Jude claimed we are still making history right now.

There was a station for kids to collaboratively create paintings on canvas. 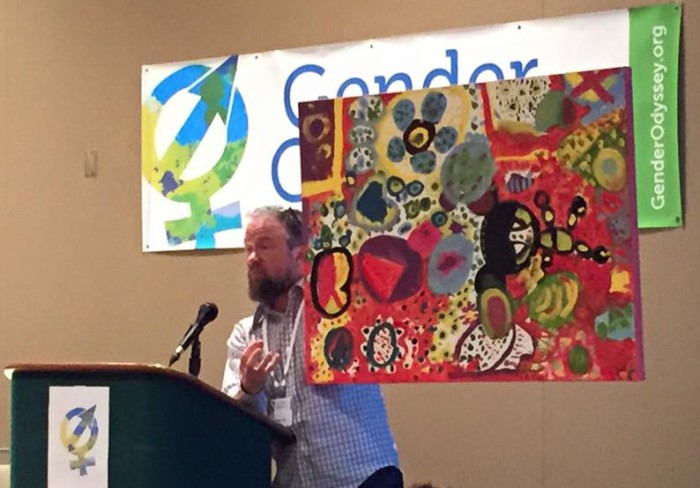 As the paintings were being displayed to the audience, somebody suggested auctioning them off and donating the proceeds. A few pieces garnered well above $300!

There were tears… from dads, mourning the loss of their sons or daughters.

There were tears… from moms, recounting stories of discrimination from family, friends, teachers.

There were tears… from grandparents, wondering how they could protect their family from a hostile world.

There were tears… from parents, processing the inner conflict of loving their child as they are, despite society telling them it’s wrong.

There were tears… from trans adults, seeing themselves in these young children, thanking parents for showing up, for supporting their kids.

There were tears… of joy, enveloped by support, love, and happiness.

The first keynote on Friday night was led by Andrea Jenkins, a trans woman of color with an impressive resumé and even more impressive accomplishments in her Midwest community.

"You'll can get married now but I can't even vote, because the person on my ID doesn't match the one in the ballot box." #GOcon2015

.@annapoetic it is true all lives matter, but that doesn't negate black lives matter. we need to say black trans lives matter! #GOcon2015

Kate’s a legend, and rightly so. Her speech was … so many things.

Getting emotional: the global trans family donated $100K to fight @katebornstein ‘s cancer. “I’m alive because of you.” #GOcon2015

“We have the face of the trans community, and she’s a trans woman of color.” @katebornstein references @Lavernecox cover of Time #GOcon2015

Part of splintering: we are intersectional. We are not simply trans. We are of a certain class, or race, or history. #GOcon2015

“We are using the same tools of misgendering. You’re not ‘real’ trans. STOP IT. THERE IS NO RIGHT OR WRONG WAY TO BE TRANS.” #GOcon2015

“Zen teaches how to deal with paradox. To most people, I’m a paradox: not a man, not a woman.” @katebornstein #GOcon2015

“Others cast us as freaks and monsters. None of us are freaks or monsters. … That’s a lie!” @katebornstein owns her freakness #GOcon2015

“Everything about gender is true. Arguably.” @katebornstein says: Gender is relative. #GOcon2015

Be an ally to your own family. Help those who need it the most. #GOcon2015

You can listen to the last 10 minutes here, or follow Gender Odyssey Twitter stream where we live-tweeted both keynotes and a few sessions with the hashtag #GOCon2015.

Gender Odyssey doesn’t just appear out of thin air. Great care goes into it by Aidan Key, and his wife Kristin, to plan, organize, put together, round up, and run the conference.

The conference is Aidan’s year-round job, along with leading local support groups, school or company or government trainings, and finding the time to comfort every single individual who gets in touch.

It’s meaningful for me to know this organization is run by a transgender person. He listens to the needs of the community, partners with other trans organizations, and provides a smiling face to the fear many parents have for their children’s unknown future.

“If you are a loved one of a trans person, that makes you family too. You married into us.” #GOcon2015

No, I did not mess up the ordering of this list.

Mom in the corner explains to her 6 yr old why @katebornstein is sad as she reads 18 names of murdered trans women. #GOcon2015

Violence in our community is a reality.

Debbie Jackson ended the night with a speech about her advocacy after the murder of Kansas City trans woman Tamara Dominguez. Everyone was moved to tears, if they weren’t sobbing already.

The conversations around Stealth held a different air about them this year. Instead of swapping strategies for maintaining a trans identity hidden, the discussion centered around…

the spectrum of disclosure

“You either tell everyone or no one. I started rethinking that. There was a part of my life I wasn’t sharing.” Unpacking stealth #GOcon2015

and how to balance a desire to come out

“I don’t care if people know. But I want to be in control of my own story. I want the power to make that choice.” #GOcon2015

with maintaining something they’ve kept private for years

36 years of living stealth. “I can be in both worlds: out and stealth. These 3 days have been life changing.” #GOcon2015

in order to make a difference.

“I didn’t believe I’d see [marriage equality] in my lifetime. I asked, how did we get here? By coming out.” Unpacking stealth #GOcon2015

“I was given so much when I started. How can I make a difference now?” Struggling to come out 20 years after transition #GOcon2015

The tide has turned.

It means so so so much to me when people come up and say “I read your blog, and it helped me.” The work I and many other trans advocates do happens almost entirely online. I frequently get discouraged; it can be difficult to get validation that the words I type into a computer screen actually change someone’s life, even in a small way.

So thank you for reminding me that speaking up about our experiences is important. There’s a real person on the other end of the line.

Kids paying attention for half a minute.

The decibel level of the Kid’s Camp room was noticeably louder than the hallways, where impromptu conversations – exchanging quick hello’s or sharing deeply personal stories – are the norm.

Most children were oblivious to outside emotions, instead engrossed in trying on costumes, crafting clay figurines, putting on a puppet show, or launching rockets. For many, it was the first time they were allowed to be themselves, or meet other kids like them.

Kid’s Camp would not be possible without Gil, Noam, Kit, and the myriad of other volunteer counselors and child wranglers who tirelessly kept up with these tiny humans.

There were 100+ kids under the age of 12, and nearly 100 Teens. Last year there were around 50 kids, and the year before just 30. The sheer number of trans youth continues to double every year.

The Professional’s track saw an increased attendance of 75%, with more out-of-state providers, all approaching trans health with a more nuanced lens:

The programming has matured and presumes that people unfamiliar with trans issues and identities are very capable of going beyond the simplistic “hormones/surgery” and “should I, shouldn’t I” framework.

The Community / Adult track also grew significantly, with 40% of folks receiving a scholarship for need-based financial assistance to be able to attend the conference.

Above all, I collect experiences. Everybody has a unique, interesting, heart-wrenching and heart-warming journey that is unique and universally relatable to my own.

“Go my darlings, be good family to each other as we travel our Gender Odyssies.” @katebornstein signs off to standing ovation #GOcon2015

And now, dear readers, I want to know, what has happened in your Gender Odyssey?

12 thoughts on “15 Things That Happened at Gender Odyssey”