This is a very personal yet political story about two nonbinary trans people meeting and creating what they started to understand as Siblinghood.

Coming to terms with being non-binary trans came with a lot of self-doubt. My initial discovery of my gender took place online; I had never met other enbies in person before. So when I found out about a trans meeting at a queer festival in Amsterdam, I felt a strong need to go, while at the same time I was so scared that I was not trans enough. Luckily two friends convinced me to go. I can still not imagine who I would be if I had not gone there.

People were welcoming and nobody questioned my presence there at all. It was the first time I finally felt a tiny bit of belonging, something I had been yearning for without knowing it. At this meeting was also the first time I spoke with né, another enby, who seemed to have more knowledge and experience than I did. We started talking and continued talking for a long time.

Strangely I felt like this person really understood me. It was not just about being trans or nonbinary – understanding each other went further. It seemed we connected on levels regarding radical thinking, polyamory, being angry and pissed off at social injustice in the world. Moreover, we shared critical ideas about violence and we were hating on academia together. The way we interacted with each other made me feel like I was enough: my anger and other feelings mattered. Through our physical interaction I learned what practicing consent meant. This made me feel safe to be vulnerable, to discover where in my body it was hurting, where in my feelings and mind it was hurting.

It’s hard to really describe in words what I felt when we got to know each other. It was intense, in a very calming way. It was soothing, in a way that I recognized them, and through that I recognized myself differently than I had before. The familiarity I had with né made me think of this imaginary friend I had as a really tiny person.

It’s not totally traceable when we started to call each other (trans) siblings. It might have been around the time né got their mastectomy. But in general, those feelings of siblinghood were there from the beginning. 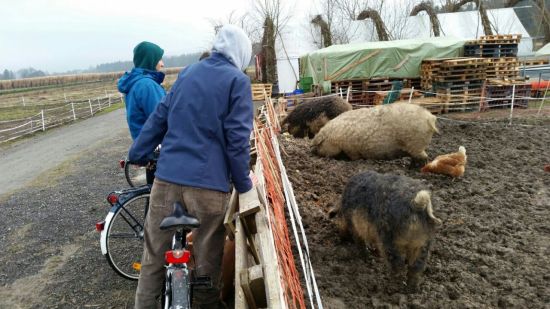 For me siblinghood carries different meanings. For example, recognizing someone else and yourself; unconditionality; a feeling of safety and caring that goes both ways. Through our siblinghood we both dared to go places within ourselves that we had been scared of before. With né I felt no judgement, no pressure, and a wholehearted support for destroying my gender and figuring out who I was. With né’s mastectomy, I could connect so much to their pain, and later to the weight being lifted off their being, perhaps because I was simultaneously feeling some of my own pains.

But our siblinghood goes beyond just feeling connected and meeting another transperson that’s going through similar things. It is something we create as well.

Siblinghood for us is about (re)learning communication. It’s about actively and empathically listening to each other and about being heard. It’s about sharing one’s knowledge and experiences, without pushing them on others. It’s about learning how to express your own needs and flaws and finding a place for those. It’s about growing into liking oneself a little bit more, because you like how you can see yourself through this other person’s eyes and what they see in you. It’s about being fascinated and satisfied with oneself again. It’s about knowing there is someone who will come with you to the doctor because they know how nerve-wrecking and violent that can be as a nonbinary person. It’s about feeling safe to say you hate the world and want to kill someone without being tone-policed after experiencing violence again. It’s about secretly turning a straight bar into a gay club and having a great night without others really understanding your joy. 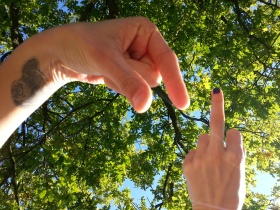 It’s about being inspired to inspire others. Because siblinghood is also something that doesn’t stop with one person.

After meeting each other, we’ve met more trans siblings. Only a handful maybe, yet enough to form a little network and support each other in our struggles. We find it exciting to think there are so many more siblings out there that we haven’t met yet.

The two of us believe we have the chance and possibility to create strong communities and networks of care among ourselves. Rather than begging or waiting for understanding from cis privilege experiencing people, we can also put energy and love into creating our own networks of respect and care for each other.

Our siblinghood is an attempt to spread our care network and grow it into something that can hold our differing experiences and living realities by empathy for each other and ourselves.

Anneluke is a genderqueer gay as fuck farmerboy, invested in ecological and social justice. In their free time they bake bread, read queer-feminist zines and cook vegan food. They love pigs, nature, and bites.

né is a kick-ass trans activist who is sensitive, radical and caring while fighting injustice. They love connecting with others and radical queer-feminist inspiration. They are a daddy and sometimes they’re a furry animal.

What Am I Thinking?

Find out what goes on behind the scenes of this blog. With only $1, you can subscribe to the super not-so-secret Patreon newsletter and receive Micah’s monthly musings.

One response to “Featured Voices: Siblinghood”