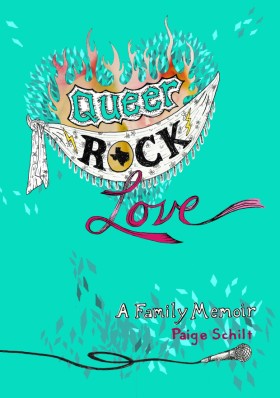 What happens when an introverted feminist academic tosses off her big black nerd glasses and succumbs to a brutal crush on a hard-rockin’ Texas boygirl? Paige Schilt’s memoir introduces her to Southern belles, singing sperm donors, gay evangelicals, and tattooed sub-cultural kinfolk.

Previously published on Mutha Magazine, this essay is an excerpt from Queer Rock Love: A Family Memoir. Buy it here! Or from your local indie bookstore!

[Micah definitely recommends buying this book, because 1) it’s not a coming out narrative, it’s about adult queers building a family; 2) it’s funny and cute and adorable, but also real and gritty and honest about dealing with life’s ups and downs; 3) it’s wonderfully written. See for yourself!]

Pregnancy made me feel really frugal. I vowed to wear only second-hand maternity clothes, I hoarded hand-me-down onesies, and I opted for the cheapest birthing class I could find.

On the evening of the first meeting, Katy and I parked in one of the hospital surface lots and wandered around until we found the education annex. I was beginning to move like a pregnant woman, and Katy held my arm protectively as we walked down the stairs to a vinyl-tiled basement corridor. In the doorway to the training room, a pasty social worker named Pat was checking off names on a clipboard.

Pat’s eyes traveled from me to Katy and back again.

“Oh, uh-hum, okay.” She laughed a nervous, high-pitched laugh. I had the feeling that we’d overloaded her circuits, and I felt annoyed that her social work training hadn’t prepared her to make queer families feel more welcome. At the same time, I was aware that we weren’t exactly a typical lesbian couple. If she had been reading Katy as a man, I might have startled her when I used the word “wife.”

These kinds of interactions happened all the time. Heck, I hadn’t been able to decipher the complex puzzle of Katy’s gender when I first saw her performing with Raunchy Reckless and the Amazons. Now that we were together, I could never predict when a stranger would read her as male and when they would read her as female. Katy was usually content to play along with whatever pronouns people assigned her. The one thing she didn’t like was when people changed their appraisal in the middle of an interaction. She wanted to protect them from embarrassment, and she also wanted to avoid the anger that sometimes came with it.

Inside the classroom, we found two seats in the circle. On our right were two Latinas—a twenty-something pregnant woman and an older companion. I hoped that they would turn out to be dykes, but they didn’t give us the knowing lesbian look. To our left was a young middle-class straight couple of a sort you see around Austin quite a bit. The woman was wearing hand-beaded earrings, and the man looked like maybe he’d been in a band in college before he became an accountant. He gave Katy a curt, dudely nod. This ought to be interesting, I thought.

“Welcome Moms and Dads!” Pat had taken her place near the white board at the front of the room. She looked at us and the two women to our right. “…And, uh, partners.” Geez, I thought, I know they might not get a lot of queers, but surely they see a lot of pregnant women without a dad in the picture. I sized up the rest of the room to see if anyone else was rolling their eyes. Near the door was a white woman in expensive-looking running tights and running shoes. She looked like the kind of person who would start doing sit-ups in the delivery room, and her husband’s hair was coiffed like Texas governor Rick Perry. Definitely Republicans.

At the other side of the circle were two young white couples who seemed to know each other. Something about their behavior—men slouched low in their seats, women giggling over Pat’s introduction—made me think that they were attending the class under duress. The women were drinking Sprites and sharing a bag of Funyuns from the vending machine in the hallway. Mrs. Running Tights looked like she was going to spontaneously combust from all the self-righteous energy that she was directing their way. 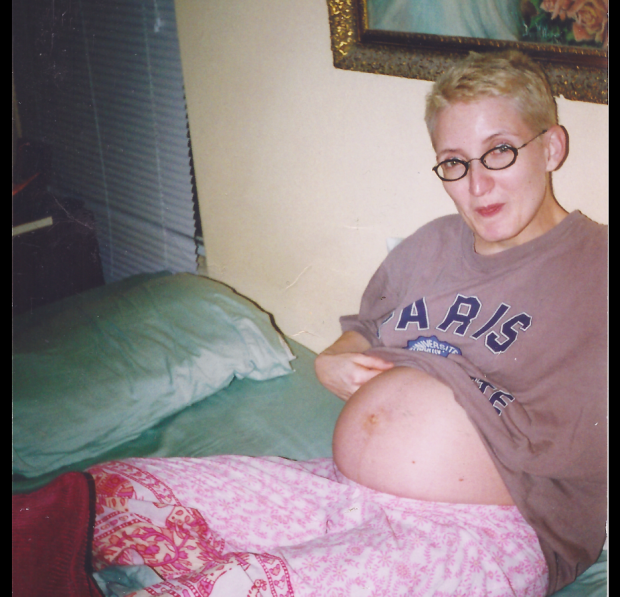 Pat asked everyone to introduce themselves and explain what they hoped to get out of the class. The women mostly talked about how many months along they were, how they’d been feeling, and whether they were having a boy or a girl. The men said reluctant things like “I’m just here to support her.” Most of them looked embarrassed already, and we hadn’t even begun to talk about vaginal canals.

When it was my turn, I told the group my name and then proceeded to speak in the first person plural.

“We just found out that we’re having a boy. Our due date is May 12,” I said, gesturing to include Katy. “It feels really soon, and I’m just hoping to learn more about what to expect in the delivery process.” Then, to take some of the pressure off Katy, I decided to introduce her too.

“This is my wife, Katy,” I said quickly, smiling and scanning the class.

I couldn’t tell how our classmates received this piece of information, but Katy handled the occasion like a pro.

“I’m really looking forward to this class,” she said. “Because it’s hard, you know, not being the one who’s carrying the baby. I want to be as involved as I can, and sometimes it’s scary, thinking that she’ll be in pain and I won’t know how to help.” Compared to the other partners, Katy was positively verbose, and I had to smile, because I knew that the professional therapist part of her just couldn’t resist this opportunity for a little psychoeducation. She was trying to model to the other dudes how to express feelings and still be manly.

On the second week of birthing class, Pat dutifully broached the topic of circumcision. She gingerly laid out some of the arguments for and against the removal of the foreskin, all the while looking absolutely terrified that someone might express an actual opinion. In the end, she advised us to speak with our OB-GYN about any concerns.

When Katy and I got in the car after class, I was fairly confident that we’d be on the same page, but I wanted to test the waters.

“I can’t believe that anyone would cut a newborn baby!”

“Well,” Katy said, keeping her eyes on the road, “I can see why some people might do it, you know, just so their kid won’t get teased in gym class.”

“Times are changing,” I said. “More and more parents are deciding not to circumcise. It won’t even be a big deal anymore.” My sister had dated an anti-circumcision activist in college, and I was basing my argument on a sample of one straight guy, but I hoped I was right.

“Yeah, maybe,” Katy replied. I could tell she wasn’t quite ready to grant my point. “It’s just that I want my son to look like…” she trailed off.

“You want your son’s penis to look like your imagined penis?”

We were at an impasse, but I wasn’t ready to give up. For New Year’s, we went to visit our gayest friends, Martin and Richard. We were hanging out in their baroquely appointed living room when I happened to let slip that we hadn’t yet agreed about circumcision.

I had to shake my head. As a trans-masculine person, Katy was generally much more of a connoisseur of the male physique than I was. But, as a gold star lesbian, her actual experience with unclothed penises was rather limited.

“It doesn’t?” she marveled. I could tell she was starting to come around.

“And if he feels strongly about it, he can always get circumcised later. But he can’t get that shit back if you cut it off.”

“Let him make the choice,” Richard concluded. “He’ll thank you for it later.”

Paige is married to Katy Koonce, frontman for the band Butch County. They live in Austin, Texas, with their son. Paige blogs at queerrocklove.com, and has written a book of the same title.

Featured Voices is a new series on NN centered on amplifying non-binary visibility. By voluntary submission or (slightly coerced) invitation, guest authors are encouraged to dig deep and publish a story around a monthly theme. Support the trans community by supporting the efforts behind FV.