Can physical transition change your inner identity? Jay, who identifies as genderless, explores this question in Featured Voices.

If you could get a flat chest by waving a wand, with no pain or risk of complications, would you do it?

If you could get a flat chest without telling a single person about it, would you do it?

If you were the only person left in the world, would you still want it?

Answering “yes” to these questions led me to the operating table. After years of wild swings between “give it to me YESTERDAY” and “that sounds terrible,” I made my decision because I was exhausted. Uncertainty takes a lot out of you. In the end, I knew “no” wasn’t a definitive enough answer because I could always return to the question. So, at last, I removed the temptation.

My uncertainty wasn’t because I didn’t know if I wanted a flat chest – I wanted a flat chest. I just wasn’t sure that I needed one, and if I didn’t need it, why put myself through surgery? If I didn’t need it, did I even deserve it? Having survived for so long with this body, I thought I was being ridiculous to want to take such a drastic step. For what? I wasn’t suicidal, or even truly miserable. I was just inconvenienced. Maybe I should take the advice given to cis people and learn to love my body rather than carve off pieces of it.

After surgery, after the pain was gone and my range of movement returned, I felt… normal.

What? Normal? I had never felt normal before in my life.

When I requested a letter from a therapist recommending top surgery, I described my dysphoria as disappointment. I told her that when I saw a picture of myself or caught a glimpse of myself in a window reflection, there was a prick of confusion: What was wrong with my chest? Oh… right. Nothing. It was supposed to stick out like that. And then I was disappointed, because I didn’t really look the way my mind believed that I looked. This wasn’t what I thought dysphoria should feel like, but the therapist was convinced.

After surgery, a thick layer of static in my thoughts was abruptly gone. Without realizing it, I used to keep my chest always in my mind. Now I could jump, slump, lean over, do pushups, or hug someone without worrying about what my chest was doing. It was like surgery had deleted a computer virus that was sucking up my processing power, and now I could function a lot more smoothly. I had gotten so used to that constant, low-level anxiety and stress that I thought it was just part of my personality. In fact, it was only dysphoria. 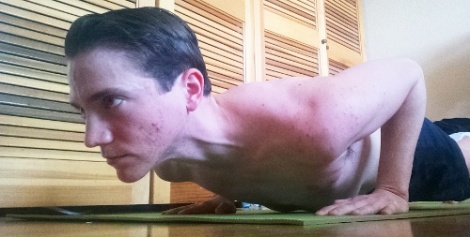 I didn’t just deserve top surgery – I needed it, although I didn’t realize that until after it was done.

And I started to wonder – what if I had more gender-related malware on my hard drive? What if more and more of my anxiety could be deleted?

I’m genderless, but the only doctor I told about my lack of gender was the therapist. I let the surgeon and all of the nurses believe I was a man, for convenience, and they were happy and excited for me. They called me “he,” congratulated me on my manly attributes, and encouraged me to continue along the female-to-male path. I felt like I was playing a part for them. It was odd but enjoyable. I used to think that being taken as a man would bother me as much as being taken as a woman, but that wasn’t the case. It didn’t feel like me, but it felt good.

Of course it felt good. For once in my life, other people – people in power – were convinced I was doing exactly the right thing when it came to my gender. They were celebrating me. It was intoxicating.

It’s very clear to me that this is the correct wording. Become a man. For most trans men, this is a gross misunderstanding of their situation because they’ve always been men, and their transition is only changing their physical and social selves. That isn’t the case for me. I’ve always been genderless. If I become a man, it’s going to be a change, a departure, a conscious choice to alter my internal identity.

The decision to take testosterone was just as difficult as the decision to have top surgery. Testosterone isn’t as sudden or painful, but its discomforts last longer and its effects are not as private. No one noticed my flat chest, but a cracking voice and a fuzz mustache are very public.

If you could get facial hair and a deeper voice without telling a single person about it, would you do it? Yes, but that isn’t an option.

Five months in, I can’t remember the last time a stranger read me as a woman, and my mask of manliness is melding into my being, becoming part of me. It’s becoming comfortable. I don’t have the same sudden clarity that came with top surgery, but every new difference – smaller hips, bigger shoulders, a thicker neck – removes another layer of noise. Changing my physical self and my social self didn’t have to change my identity, but I think it might have. I still call myself genderless, but I also lump myself in with trans guys without thinking. When someone makes a comment about men, I feel like I’m included. For better or worse.

Is it because I am genderless that this is a possibility? My gender is a void, and emptiness is difficult to maintain in a world that can’t conceive of it. Filling it up with something people understand and affirm is so much easier than struggling along, alone.

If you were the only person left in the world, would your gender be any different? Does it matter?

Jay is a genderless novelist and runner from New Hampshire living nocturnally under the endless San Diego sun. Their (his?) blog, A Fine Line, lives at jmcottle.com.

Become a supporter of all the work behind Featured Voices at patreon.com/neutrois.