Continuing February’s theme of Featured Voices: Top Surgery I wanted to highlight someone in his mid-thirties who has learned to comfortably inhabit that genderqueer limbo, yet still makes time to self-reflect about body, gender, past, and future.

After 12 years of thinking about it, Kameron scheduled top surgery. With express clarity, Kameron walks us through the years leading up to this decision. There wasn’t confusion, necessarily; it was rather a process of learning to listen to his gut “despite the fact that my gut speaks very quietly.”

I am getting top surgery on June 1st.

This may come as a surprise, since I have barely talked about or written about my feelings toward my chest.  That doesn’t mean the thought process wasn’t there though; it just means I wasn’t ready for it to be much more than something swirling in my head, around and around and around.  I’d mention it on occasion to my partner.  And to my therapist.  It was always, vaguely, something I was going to do at some point.

I do not have feelings of dysphoria about my chest, as it relates to my body, privately.  It seems like it fits, well enough, but also it simultaneously looks incongruous.  My issues mainly arise within the public sphere. They can’t be visible. My clothing decisions are made based around this, first and foremost.

Can a small chested, non-binary person who does not experience strong feelings of dysphoria get top surgery?  Why not?!  It just might mean that the thought process ends up taking a very long time.  And it has – I’ve been thinking about it for… roughly 12 years.

It is a want, not a need.  I don’t need this – I’d say it’s been a persistent nagging feeling for years and years and years, but never an intolerable feeling of disgust or revulsion.  I have made a decision, and it’s still a decision that is right for me, even if it hasn’t been clear cut or motivated by strong feelings.  I talked in therapy recently about how it seems like such a drastic thing to do in the absence of strong feelings.  She asked me what I do feel strongly about, and I said my spouse.  Other than that, I couldn’t really think of much.  She suggested that maybe the criteria should be about something else other than how strongly I feel about it.  This makes sense.  It’s about how long I’ve thought about it.  It’s about my attitudes about my chest over time.  It’s about the fact that when I started therapy four years ago, I felt so good that I wrote in my journal, “[My therapist] is awesome!  I can do whatever I want!  I could get top surgery.”  It’s about my process of learning to trust my gut, despite the fact that my gut speaks very quietly.

I know that I am not comfortable publicly with a female chest, and I know that I will be with a male chest, with a flat chest, under my clothes.  I do, however, have some slight concerns about whether I will privately be comfortable with a male chest.  I’m not male.  Will it, too, look incongruous?  I very much doubt that I would ever go without a shirt on the beach or out in public.  Part of this is because I don’t think I look masculine enough for that to work for me, and part of it is just social conditioning – how could I take my shirt off if I’ve always had it on?  I don’t think I could.  Which is fine – that’s not one of my reasons for getting surgery.

I can equate this fine balance with how I have felt about my name.  My legal name is Katherine.  I had gone by “Katie” for the first 22 years of my life.  I altered it to the more staccato “KT” after college, and went by that for the next 11 years.  Within those 11 years, I frequently considered changing my name (toying around with a lot of masculine names), but I wasn’t sure if I was going to be transitioning to male or not.

In my thirties I realized I could inhabit a happy medium for the rest of my life – that being genderqueer wasn’t just a young person’s thing, or a stopover identity before transitioning.  All the waiting and uncertainty I felt about my gender could gradually stabilize; I started to settle into the in-between and write a lot about it in the process.  “KT” still seemed too feminine to be a great match, and I finally settled on “Kameron” as an androgynous, maybe slightly more masculine than feminine, alternative.  It doesn’t quite fit, but I am confident that after so much deliberating, it is the closest that I will come.  It is taking a while to get used to.

Sometimes I miss “KT,” because that’s who I was for so long. I think I will have a similar experience with my chest.  And that’s okay if it’s not a perfect answer, as long as it’s closer to who I feel myself to be.  I’m confident that it will be. 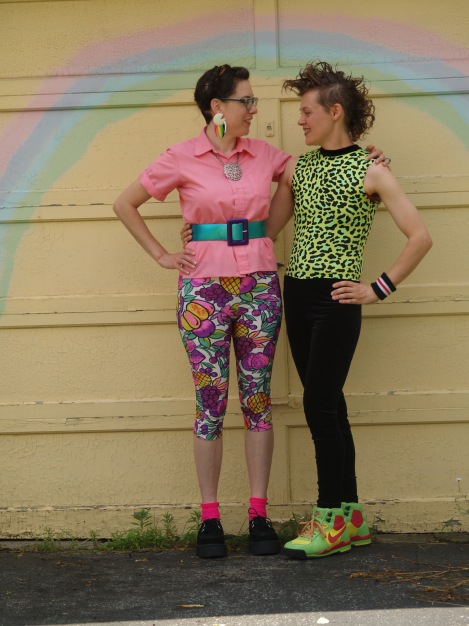 Kameron dressed up in drag

Kameron is a genderqueer janitor in his mid-thirties who writes at Janitorqueer.  He is also a radio DJ, and he lives in a house with his spouse and two cats.

You can read more about Kameron’s top surgery process on his blog: