Kieran is an Equestrian major in college (yes, there is such a thing!) and has spent their whole life around horses. But growing up – and coming out – in the “don’t ask don’t tell” community at the barn has proven life-changing.

Coming Out at the Barn

The riding stable has always been home for me, more than anywhere else.

The sloping fields, the worn cobblestones, and the sand riding arenas have seen me at my best, my worst, and everything in between. I usually avoid thinking about my life before I came out because I can’t quite face that other person in my history yet, but the barn is an exception. The horses allow me to be genuine, so my barn memories are safe. I have clear recollections of myself at various ages, wrestling saddles in the tack room, dragging wheelbarrows full of hay through the aisles, and riding my favorite horse bareback when the stable yard was quiet. The barn has been, and continues to be, the biggest influence in my life. The people, the horses, the long days working and riding are what I know best.

So when I realized that I’m not cisgender, I stepped into the mysterious intersection of the Equestrian and queer worlds. 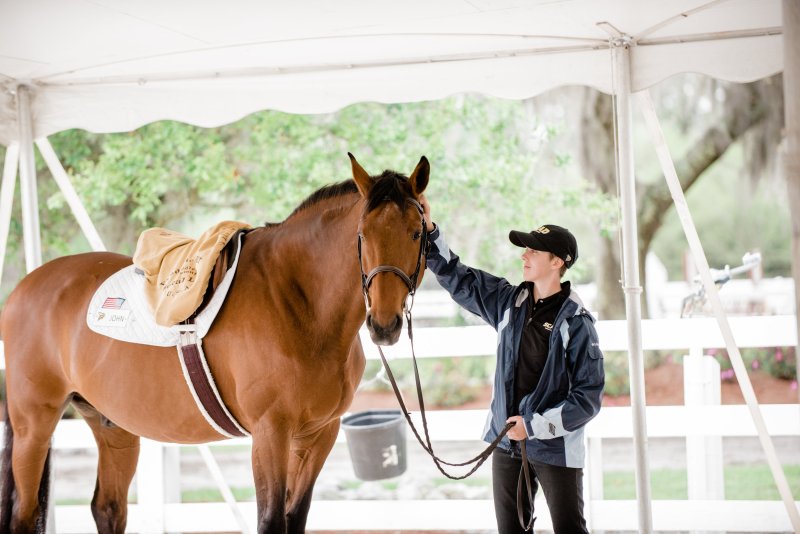 The horse world is complicated. The best way to describe it is with a sigh and some noncommittal gesturing but, lacking that capability in this medium, I’ll try words.

First off, the horse world is massive. Equestrians come from all over the world, bringing along their varied upbringings, personalities, and riding theories, so when I talk about my experience with horse people I’m only speaking about a fraction of the community.

The general opinion towards queer people, however, is usually of the ‘don’t ask don’t tell’ variety. Many riders aren’t openly hostile to someone being gay or trans or bi in the barn, but they’d rather you not talk about it too much. Gay men specifically are pretty well accepted, at least in my area (here’s a thesis about the inclusion of gay men in Equestrian sport) and, to be fair, many horse people don’t want to hear any relationships period, cis-het or otherwise. Time at the barn is either spent working, riding, or trying to find the time to eat, shower, and fall asleep once you get home.

Focusing on the horses and the riding is exactly what I want; that silence is safe. But when you’re a shy kid questioning their straightness or their gender, that silence can also be oppressive.

Growing Up at the Barn

I’ve been riding at the same barn since I was six years old. Some of the instructors have known me since before I can remember and my barn family knows parts of me that even my parents don’t. My parents are lovely, but their eyes glaze over a little when I start talking about things like the merits of Michael Jung’s Dressage test in the 2016 Rolex (and his Grand Slam title!!) or McLain Ward’s new post at the top of the Longines world show jumping ranks.

The only significant community in my life has always been the barn. The defining moments of my childhood came muddy, sweaty, and covered in horsehair. I had friends outside of the barn, but I didn’t wake up at 4am to spend all day at horse shows with them and I didn’t spend my summers dusty and sunburned in the riding rings with them, so our bonds were more casual than those I had with fellow riders.

That’s why the ‘leave it in your tack trunk’ attitude towards queerness hurt me. The barn was all I had. 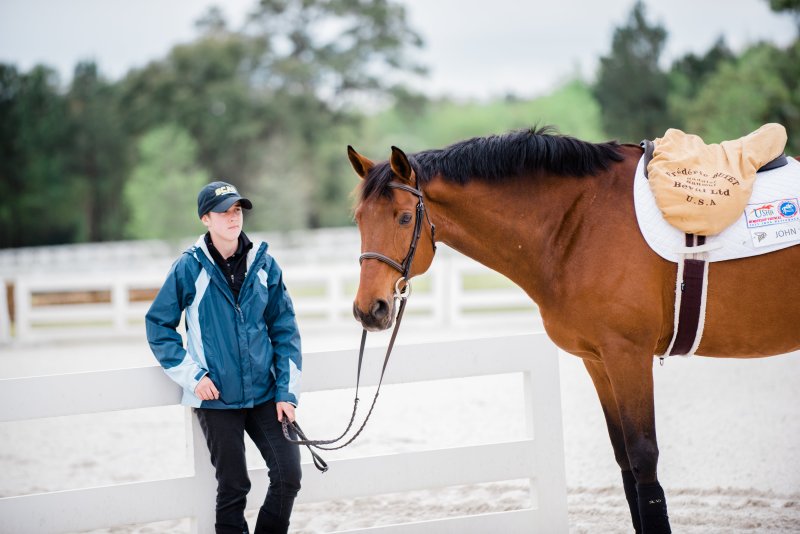 While I knew gay people existed, I wasn’t sure I knew any besides the two at the barn. I wasn’t familiar with the term transgender as anything other than a clinical definition until college. Being something other than straight and cisgender was never something I considered because there was nobody around me who was any different.

The realization that I was trans came after my first year in college, on the heels of months of acute anxiety that I could never seem to find the root of, and a life of subtle dysphoria I’d attributed to other things. I actually came out as aromantic asexual first, and through the Ace community I was introduced to the possibility that I might not be cis. Without mentioning this to anyone, I figured out some specifics and explored terms over the course of the year, finally settling into non-binary as a gender identifier. When I was ready, I told my best friend, the Queers and Allies club at college, my most trustworthy professor, and my Equestrian team coach.

All my disclosures were met with overwhelming success. I go to an art school, so I expected a certain level of tolerance from the people there. But going home was a different story.

Coming Out at the Barn

The summer of 2015 was the first time I’d been home after coming out to myself. I’d signed up to work summer camp at the barn, just as I had for the past four years, agreeing to dedicate my days to the horses, the campers, and my fellow staff members under the withering heat of a Central-Maryland summer.

I decided to come out to the staff as a test run for coming out to my parents, because in many ways, these people were my family too. The summer staff is a mix of adults who have known me since I was small, college kids I grew up with, and younger teens who are rising in the paid ranks the same way I did. I know most of these people in the intimate way only riders know each other: I can look across the ring and pick one identical rider out from the other just by watching them post the trot. I know exactly what they like in a horse, and I’ll hear their voices in my sleep after a few weeks of teaching summer camp with them. I did not, however, know much about them in terms of tolerance or opinions on queer issues. Even so, coming out at work felt like a natural next step. 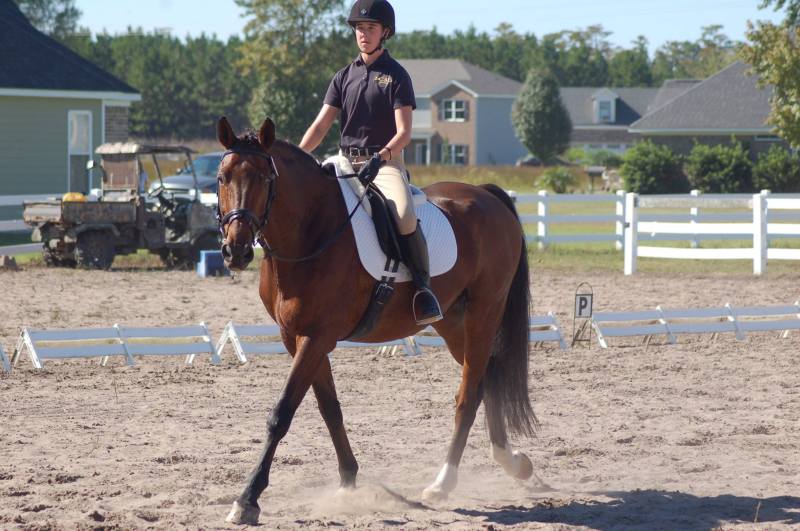 Due to the lack of role models for a budding, trans Equestrian like myself, I’d been moving through my transition based solely on what felt right and what felt wrong. Coming out didn’t actually feel right (because public announcements of private matters never do) but being misgendered and deadnamed all summer definitely felt wrong. Coming out was the only way for me to feel safe in this place I considered my first home, even if it meant exposing myself to aggression and discrimination. I’d rather fight than hide.

Even though I didn’t peg anyone at the barn as a raging transphobe, I prepared to lose people after coming out. I prepared to defend my identity fiercely. I prepared for seismic shifts in relationships. I prepared to lose a sense of belonging that I’d cherished since I was too short to reach the brush box. That’s what you do; that’s what all the online guides say. They say, be ready to cut ties, be ready for this thing that you feel so good about, that you’ve struggled so much with and have finally come to make peace with, to cost you. So I prepared, I was ready.

The only real opportunity I had to come out was during a staff meeting (it was that or leave notes on everyone’s saddle). The meeting went over meeting stuff, and then opened for additional commentary from the staff. I could sense the meeting drawing to a close so I quickly raised my hand. All eyes turned to me, and I remember being momentarily incapable of speech, thinking I was going to lose my chance because my nerves quit at the last second. Then I said something along the lines of, “So you may have noticed I’m like, not even a little straight. So call me Kieran, and use he/him pronouns, thanks,” at approximately lightspeed. (Although I prefer they/them, I just wasn’t confident enough to face coming out and explaining what non-binary meant in the same breath. So I asked for he/him pronouns. This feels like a personal failing, but he/him is comfortable, and having my trans identity recognized at work is enough for me.)

I noticed a few confused expressions in the crowd, but the overwhelming majority of these people, who I’d sweat and bled and cried and triumphed beside for years, who I’d steeled myself to lose, who I’d expected to turn on me for something that I could neither control nor hide any longer, were all supportive and accepting.

I spent the summer being rendered mute with surprise as my coworkers corrected my name, pronouns, and defended me without hesitation. I remember one instructor telling me she spent her car ride home repeating sentences with my new name and pronouns out loud so she wouldn’t mess them up. Another worker spoke up over a counselor during morning briefings to correct her when she deadnamed me, and I even had a parent (a total stranger) support me when one of the younger campers started asking questions about why I didn’t look or sound like a ‘normal’ boy. 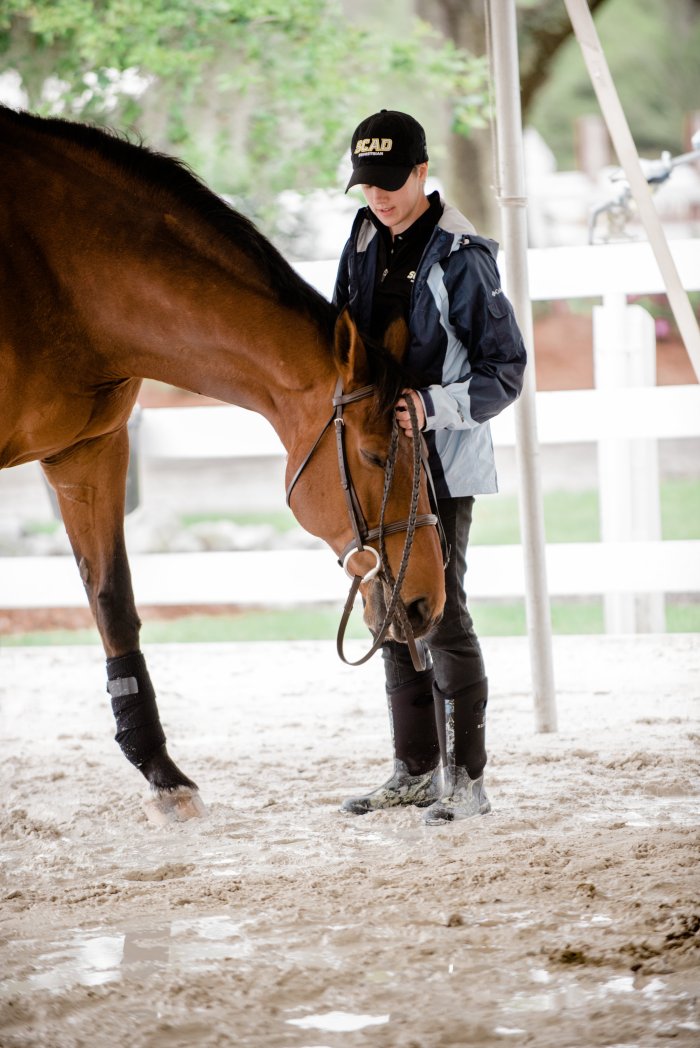 I’ve definitely encountered riders I didn’t feel safe being around because of the values they held, but none of the people who matter to me have been anything less than respectful. The equine industry is demanding, fast paced, and honestly pretty mean. It can be tough to be different in a world saturated in tradition. But there are good people out there and many hold the opinion that your riding and horsemanship abilities are all that matter, so there’s hope.

If there are any trans, non-binary, or otherwise queer Equestrians reading this, you’re not nearly as alone as you think, so keep your heels down, your eyes up, and keep riding.

Kieran is a soon-to-be graduate of the Savannah College of Art and Design. They have experience with Hunters, but their heart lies with Dressage, Eventing, and Off The Track Thoroughbreds. They keep a semi-regular blog, where they write more about horses and being trans.

Every month guest authors submit their story around a monthly theme. So far we’ve featured over 40 posts by different non-binary people and their allies. Keep this work going by donating a cup of coffee a month. In return you’ll get random surprises in the mail!

12 thoughts on “Featured Voices: Coming Out at the Barn”