Beck spent their undergraduate years immersed in a welcoming transgender community. When Beck became a graduate student at the same university, they were suddenly back in the closet. Thanks to the support of peers and professors, Beck has taken steps to be out at work as a non-binary graduate student in a plant biology lab.

What I Really Prefer

People often tell you that during your four years in college you will learn as much about yourself, if not more, as you will learn about the subject matter for which you are attaining a degree.

Unlike my suburban, just-outside-of-Boston high school, my new college had and still has a very active and affirming queer community. I found myself regularly attending meetings of the LGBTQA+ student group because after all, I finally had a safe space to be my big gay gender-non-conforming self.  The first part of every one of those meetings consisted of us going around in a circle stating four things: our preferred name, preferred pronouns, answer to a random question of the week (Pterodactyl or Brontosaurus, and why?), and of course, what underwear we were wearing. Regardless of everyone’s underwear (or lack thereof), we were all there together as a support system for each other. I made some of my most meaningful friendships by being a part of this group, as well as through a local transgender-focused conference.

It was at one of those meetings where I first realized that gender was an actual thing people talked about, explored, questioned, and were tormented by.  That set off my own genderquest, searching for myself in my spare time between classes and long nights at the library.

During the summer between my first and second year (after a Tegan and Sara concert no less) someone from that queer club asked me what name and pronoun I really preferred. This time, my response to this question became a defining moment in my gender journey.  “Well, I really like using they/them pronouns. But I’m not really sure what name I prefer… do you have any ideas?” We brainstormed and came up with Beck – not only was it gender-neutral, my new namesake was also a Grammy-award winning musician. Except that, beyond the space of those Monday night meetings, I was still Rebecca. 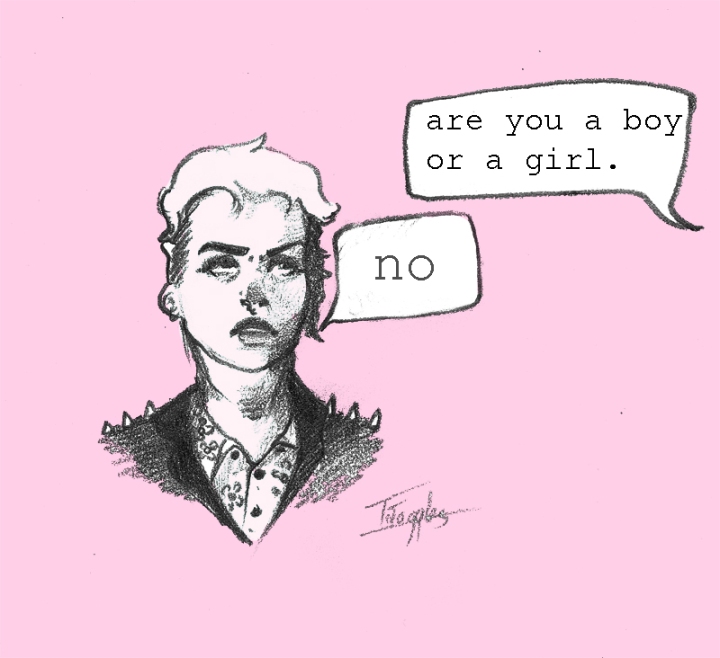 Fortunately, in my university students can change their preferred name and pronouns on the registrar so that (most) school-related documents reflect those preferences. Despite this system, most of my professors ignored those preferences and glazed over their rosters when it came time to take attendance at the beginning of each semester so that I, and other trans identified students, were essentially “outed” in front of the whole class. I just remember hearing my “name” being called aloud and cringing at the sound of it. The professor’s mouth would open, and as much as I hoped they would see my preferred name in parentheses next to my legal one, they would utter those three, heart-wrenching syllables “Reeee-beccc-aaaaa.” I basically wanted to run to the nearest gender-neutral bathroom and cry. Every semester. Every class.

That is until one professor, one whom I least-expected to be gender-aware, sent me an email asking me about my gender identity and what pronouns he should be using. I was in disbelief. This older, straight, scientifically-minded man was asking ME what my pronoun situation was. And so I told him, and only him. It felt good. It felt safe knowing that the chair of my department was on my team and would go to bat for me should he need to.

He wasn’t the only professor in the department that was curious about my gender. As an undergrad, I started doing research in a plant development lab, so I would hang out a lot in the plant biology department’s building. A year later a friend relayed to me that another professor asked her graduate student, “There’s this … person … working in Professor X’s lab … are they a boy or a girl?” The student, who had never even met me, was dumbfounded. “I think she’s a girl?” As if knowing I was one or the other would let that professor sleep at night.

Turns out the grad student (we’re good friends now) was half-right. I was still using she/her pronouns among scientists; I had made the decision to not bother with the whole pronoun thing in this sphere of my life.

Years later, I am now a graduate student in that same department. Not having my pronouns recognized here took a toll on my mental health. My experience as a queer and gender non-conforming graduate student was very different from my undergrad experience. There’s no student club just for graduate students. The only identity most professors care about is your identity as a scientist, which takes priority over all other aspects of yourself. So my identity became Beck the Master’s student working on the evolution and development of flowering plants, Beck the graduate Teaching Assistant, Beck the labmate, Beck the classmate. I had lost who I was for the benefit of my career. I thought I’d figure it out someday. I thought that maybe when I began to medically transition, then I’d be able to tell my colleagues that I was transgender.

It wasn’t until my third year as a graduate student that I came across the word “non-binary.” A weight was lifted off of my chest – I finally found a place to call home. During my undergrad, I had identified as genderqueer. But for some reason, that label didn’t sit well with me; it didn’t feel quite right. To me, it seemed to have this connotation that I would never physically transition, that genderqueer was just a stepping stone. I was under the impression that taking testosterone or having top surgery meant I was a man, which I knew I was not, so I did not pursue those options. Imagine my delight when I started reading (on this blog!) about non-binary transition. I immediately started taking steps towards becoming my authentic self, the first of which was believing in myself.

I took small steps in coming out at work as non-binary only a few months ago.  I decided to tell my close graduate student friends that I was non-binary, and to use they/them pronouns when talking about me. Their support gave me the courage to then tell my advisor, and I’ve gradually been able to tell a few more people whom I trust. What a relief!

People still mess up with the pronouns here and there, but just having them know lets me be my authentic self in the context of my career. Telling my advisor was a huge step; somehow, disclosing to someone that isn’t exactly my peer made my identity feel more valid.

Going forward in my career – wherever that may take me – I now have the courage to stand up for myself and who I am, along with continuing to explore my gender in both a very personal and public way. For example, my trans pride flag is the first thing people see when they pass by my desk, standing out in front of my botany textbooks.

Sometimes I refer back to the email conversation with that first inquisitive professor, since I find his response most gratifying:

I am possessed of a rich history of friendships with diverse people, which means I am familiar and comfortable with the terrain, and particularly eager to forward societal progress in this area.   I stand to learn more from you, because you are clearly much nearer the center of the transitions underway.

Thanks for giving me your particular preferences.  People tend to pay attention to what I say. They will follow suit, so getting it right is important to me.”

That’s coming from a 68-year old tenured professor, which fills me with hope. 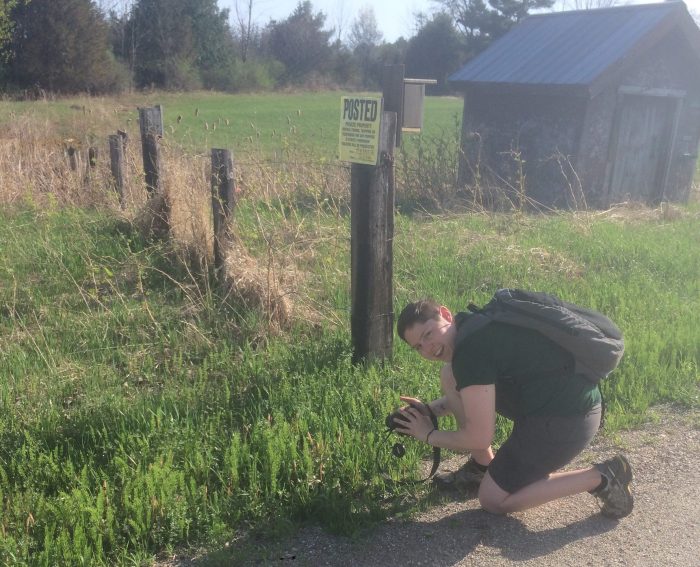 Beck is a graduate student studying plant biology and lives in Vermont with their partner Liz and their two cats Harvey Milk-Moustache and Ru Small. When not being a stressed-out graduate student, Beck can be found crouching to photograph flowers on a forest floor near you.

Massive Education for the Masses

The education and visibility Featured Voices provides is made possible thanks to kind donations by readers like you. Please help keep it going by supporting my Patreon campaign, financially or media-socially.

8 thoughts on “Featured Voices: What I Really Prefer”