Everyone’s gender is different, and that’s great. But what do you transition to, when everybody is following a different path? For Indi, the lack of examples has meant becoming vis own inspiration to follow.

The non-binary community does a great job of being inclusive and supportive for all comers. Questioning folks are told there’s no wrong way to express their gender, everyone’s gender is different, everyone’s path is different. This is all true, and this is all valuable, but it can also be pretty overwhelming. In my own years-long gender journey, I’ve looked and looked, trying to find some clear, well-trodden path to follow, and all I see are a bunch of people going off in their own directions. And none of them look like me.

One thing that’s been clear to me as I’ve tried to work out my identity (gender and otherwise) is the value of examples and inspiration. It wasn’t until I started meeting queer people in college that I conceived of the notion that I might be queer myself. It wasn’t until I read about non-binary characters in science fiction and fantasy (thank you, Greg Egan) that I started to realize that I wasn’t male or female. It wasn’t until I saw trans narratives in media that I recognized the vague wrongness that had always been with me for the dysphoria that it was. In each case, the inspiration caused a profound change in me, re-contextualizing things that I’d done my best to not think about, and giving me at least the beginning of a new way to see myself.

With this new knowledge came the desire – and the need – to express it somewhere other than just in my head. I saw examples of people addressing their dysphoria by transitioning, but the specifics of the examples were all wrong. I searched far and wide for others who felt they weren’t male or female. I found a few, though not as many as there are now; this was years before the recent explosion in non-binary visibility. The inclusiveness was still there, but the examples weren’t. Others had success mixing masculine and feminine signifiers, but I knew I wanted as little as possible of either, and saw no evidence of anyone else trying that. Worse, when it came to non-binary transition, all I could find were stories of people struggling through restrictive systems with little success. In short, real-life inspiration was pretty hard to find.

I felt stuck, for years. The possibility of transition remained theoretical, expressed online in rambling journal posts and fantasy role-play. Slowly though, circumstances changed. They changed in the world, with standards of care improving and non-binary narratives diversifying. But they also changed inside me. The tension grew, the need to do something, anything. At the same time, all my hypothetical and virtual experimentation was laying groundwork. Online, I could look however I wanted, state whatever gender I wanted (I tended to avoid places that made me choose one from a list), and figure out what to emphasize about myself that didn’t touch on binary gender at all. I loved bright color, I loved body decoration, I loved animal motifs. I was starting to become my own example, my own inspiration. 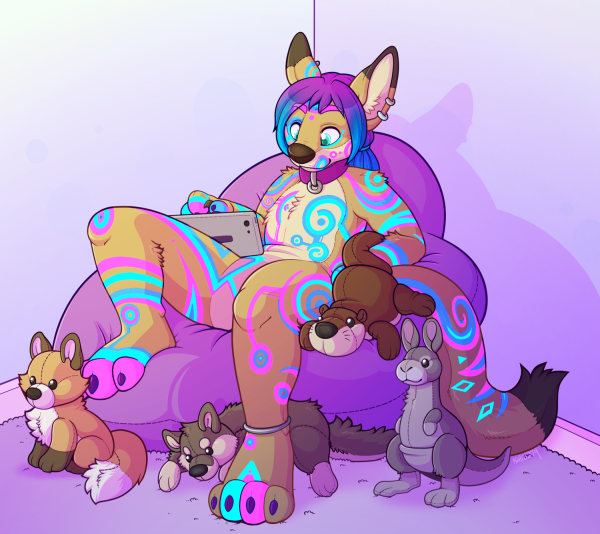 “Me, if I really had things my way” Artwork by NowAndLater.

Finally, everything came together, and I took the leap. Once again, external inspirations and examples helped immensely, as trans friends came out and started transition, and the growth of non-binary resources started to include concrete experiences that I could relate to, at least a bit. At this point, the logistics of the physical transition were the easy part; not only had I been reading and obsessing about transition options for years, but also the policies of medical providers had finally progressed to the point that I could actually use them. They weren’t perfect, but just knowing I could do something inspired me try to see just how much I could do.

Expression was, of course, still the hard part. It’s hard to find a piece of clothing that doesn’t have some presumed gender assigned to it; just look at how stores are laid out. People of all genders can wear jeans and t-shirts without raising an eyebrow, but in our male-default culture such an outfit doesn’t do much to offset other male signifiers (height, build) that are more difficult to control.

Thanks to my years of hypothesizing, I at least had a place to start from. I began to treat the whole thing like a series of experiments. Would wearing female-cut pants and shirts change anything? How about adding more colorful accessories? How would I feel about wearing a skirt? How about a skirt plus a binder? Dyed hair? Improbable club-wear as daily dress? Results started to come in, and it worked much like it had online: what felt best was turning up the volume on things that didn’t touch directly on gender at all. And above all, it felt wonderful to be doing something other than trying to slip by unnoticed in jeans and baggy t-shirts. 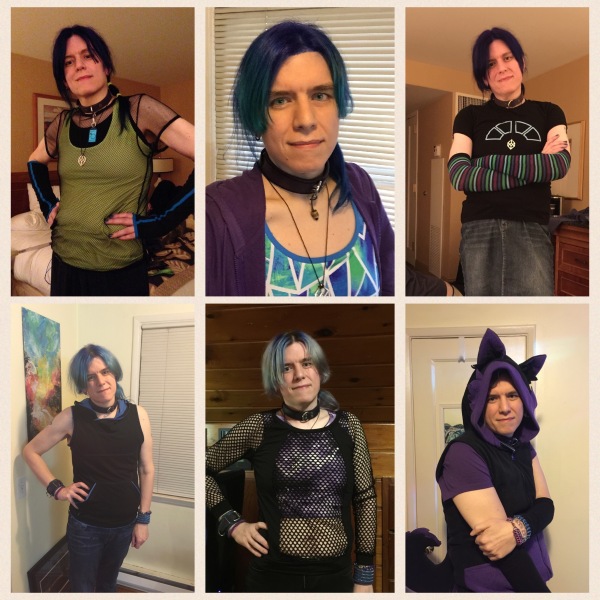 It was fun, but it was also a balancing act. At first, I cringed at being called “he” and “sir”, while welcoming the occasional “she” and “ma’am” as signs that my expression changes were having some sort of effect. However, when the latter became the most common forms of address, I started to feel very uncomfortable with them as well. I tweaked the experiments (more binder? less skirt?) and kept going. Eventually, I realized I’d stopped desperately searching for external examples and inspiration. My own ideas had become enough.

I still wish there were more folks like me out there. I love that everyone’s gender is different, but there’s something special and validating about finding someone who seems to have dealt with very similar challenges and came to very similar results. In becoming my own example I’ve learned a lot about myself, and put together a gender that is truly mine. I hope that process, at least, can serve as an inspiration to others.

Indi Latrani is a glowy synthetic animal hybrid who lives on the internet. Morgan Nichols is an AMAB neutrois design geek who lives in the depths of Cascadia. The boundary between them is so easily crossed as to barely exist. Their pronouns are ve/ver/vis.

Create the inspiration for those to come. One cup of coffee each month is enough to fuel Micah and the dozens of authors featured on this blog.