Every year I express my gratitude at being able to have this opportunity. While top surgery isn’t the only thing that changed my life for the better, it was certainly a defining moment, the catalyst for becoming myself.

There isn’t much more to add that I haven’t written about already. Instead, I’m taking some time to compile and address the questions about my top surgery I’ve received from hundreds of emails over these four years in one neat post, in hopes of making the answers more easily accessible. In a subsequent post I’ll answer general questions about top surgery (ask them here).

Who was your surgeon?
Dr. Paul Steinwald, previously based in Chicago but relocated to Denver.

What was the total cost?
About $8K for the surgery, about $10K total, including travel costs for 2 people and a 7 day hotel stay.

Did you pay out of pocket?
Yes.

Did you bind before surgery?
Yes, every day for about a year. I mostly used the Underworks binder.

How long did it take to schedule?
I flew in for a consult early December 2010, having scheduled that about a month or so before (most doctors offer virtual consultations now). There was wide availability to pick a date, so I scheduled the surgery for late February to give me enough time to plan everything out.

What kind of research did you do beforehand?
Lots. Tons! Countless hours spent browsing photos, emailing people, and wracking my brain over the pro’s and con’s of pretty much everything. Luckily for you, I boiled down the process of getting the ball rolling in a post.

(The only reason I post so many pictures is because that’s what I needed when I was searching.) 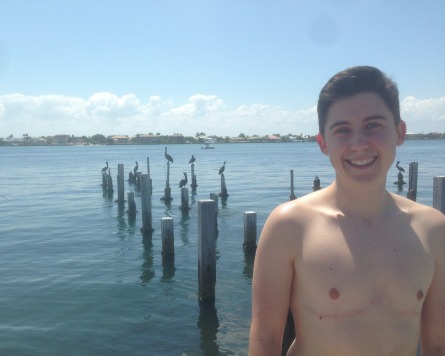 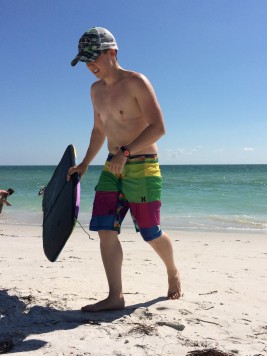 Back from the action 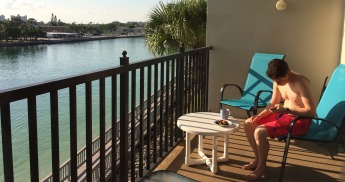 What did you identify as? Are you FTM? Did you lie about your identity?
At the time, I knew I was transgender: not female and not male. However, I didn’t socially transition until two years later; for all intents and purposes I was “female-identified” as I was still using my old name, feminine pronouns, and socially seen and treated as a girl.

I did not have to lie or hide or pretend. Dr Steinwald is one of many surgeons who uses Informed Consent. This means you don’t need a letter from a therapist; the doctor ascertains that you are transgender and/or eligible for the surgery by asking you. Moreover, WPATH updated their Standards of Care* to version 7 shortly after my surgery in 2011 to reflect the needs of a broader spectrum of gender identities. They specify that an individual does not need to be on testosterone, nor do they have to identify as trans male (though they still recommend a letter from a therapist). There is no requirement for being out or having lived in a certain gender for a certain amount of time.

Many more doctors these days are using the Informed Consent model. There are a couple of lists floating around, but the best way to find out is by contacting the surgeon’s office directly and asking.

* WPATH Standards of Care v7 (SOC) are the leading medical guidelines for transgender health care. The updated version highlights that these are guidelines not rules, use words like “target gender” as opposed to “opposite gender,” emphasize individual needs over following a set of rules, and cautioning that not everyone will strictly fit the “requirements.”

What procedure did you have?
I had the t-anchor surgery. It is similar to double incision, except for two main differences, which are mostly due to the technique used to cut and rearrange the underlying tissue and skin. (Read more about various techniques and styles here.)

First, the nipples are not grafted; rather, the nipple remains attached at the stalk and its blood supply the whole time. Some DIs also offer the “pedicle technique” instead of grafts, which affords a better chance at retaining nipple sensation.

Second, there is a small vertical scar from the nipple down to the main scar, which is barely visible.

I chose this technique because the results seemed more aesthetically pleasing to me. It is a variation of the normal breast reduction technique, so it’s surprising that not many surgeons perform it, opting for a regular DI instead. If you’re interested in this technique ask your surgeon if they’re willing to do it.

What about your nipples?
The areolas were resized, but not the nipples, as they were originally small.

I can’t speak to sensation, I really don’t know what that means…

What about the scars?
After a few weeks my scars turned hypertrophic (sometimes known as keloid, but that is a more extreme form). This is genetic, so ask your family members about their scars, or if you’ve had surgery before you’ll know. There is no way to prevent it per se, but the earlier you seek treatment the better.

The most effective treatment I found  for this was cortisone injections. I’ve had several rounds, they are not that painful, and insurance covered it. (Tip: the doctor can directly inject this into the incision during operation to prevent scars from becoming hypertrophic.) I highly recommend this.

Silicone is the second best answer. It must be 100% silicone – I used both a gel and scar strips for about two years. Gentle massages help too.

My scars don’t hurt, though there was slight numbness on and around the scars for up to a year.

It should be noted there has been significant progress in scar healing each year, even after four years.

To compare year over year, I try to take the same shots in the same angle, with the same lighting. (You can tell by the wildly varying skin tone that I’m not very good at this.) Scrolling through, the progress is clearly visible. 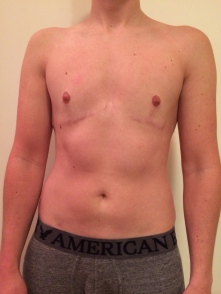 What was your recovery like?
I started my blog right before surgery, so you can read the details of the process, including a 7 day journal, in the archives. I would classify the experience as: painful for a few days, but not extremely. One week after the surgery I was recovered enough to get on a plane and fly back home. I returned to the office (at a desk job) after the second week.

I went through a brief period of post-surgical depression and anxiety. This should probably be talked about more often in our community so people know it’s completely normal to feel anxious before/after surgery.

When did you start to exercise again?
It wasn’t until week 5 that I started with some light jogging, and no upper body strengthening until week 8, beginning with light yoga. It was about 10-12 weeks before I started rock climbing and weight training, picking it back up at a very slow pace. I don’t feel surgery has affected my overall upper body strength – if anything, feeling better about my body motivates me to exercise more.

How did you deal with locker rooms when you were still socially female?
I didn’t. That’s a terrible answer, I know, but my house is a block away from my gym, so I never used the facilities there, not even to change, much less shower.

How do you deal with locker rooms now?
As I mentioned, I socially transitioned more than a year after surgery, which included switching to use the men’s bathrooms full time. If I have to change I go into a stall. Recently I was in a men’s locker room and had to use the showers for the first time. I made sure to switch out my underwear before leaving the shower stall. Other than being shocked over seeing more naked men than I had ever seen (not very many), nobody gave me any trouble.

Did top surgery make you pass more often as male?
Not really. Surgery didn’t sway the general public opinion of my gender one way or another. Since I was binding beforehand, I already looked flat chested, so I don’t think anyone noticed a difference. People who knew me as a girl continued to see me as such, and even today I get comments about my non-existent breasts (like, “those of us with small boobs”). There have been folk who refer to me as “she” while I was topless…

So how come you are seen more as male nowadays?
I think this is due to a combination of everything. I’ve since changed my name and pronouns, so when someone talks about me there is an immediate cue as to which gender I should be referred to. I’ve taken testosterone, which deepened my voice somewhat, and probably changed my facial structure, plus a bit of facial hair. I lost weight and aged, which has caused my face to have a slightly more angular look.

I’ve also perfected my fashion style, which causes people to see me as awesome, regardless of my gender 😉

FWIW, I still get seen as both genders by strangers.

Wait, why do you want to pass as male? I thought you said you were non-binary…
I feel more comfortable being seen in as masculine, even though my gender isn’t male.

From this question I assume you’re new to my blog (hi! welcome!). There’s a 5 year backstory of confusion and deliberation you should probably catch up on…

Were you “out” before your surgery?
Not in the traditional sense. I told my parents and brother I was getting surgery, consequently coming out as transgender to them. My dad even flew in for the surgery with me. My partner obviously knew. One of my close friends also knew. But that’s about it. I didn’t tell my co-workers what the surgery was for, and I didn’t yet feel comfortable announcing it to any of my other friends. In fact, most of my old acquaintances probably don’t know that I got surgery, or even that I’m trans, except those who have guessed through the grapevine. In my personal profiles, I’ve only ever posted one picture of myself in a bathing suit. It’s not a topic that comes up with my friends (most know I’m trans, some don’t), except in a trans-specific context.

Does your surgery “out” you?
Nobody has ever come up to me and pointed or asked whether I’m trans.  I’ve been asked about my mystery scars very few times, once by a well-meaning stranger and nothing came of it, another time by my massage therapist (I was surprised he hadn’t figured it out). Another time we were at a lake with a friend, who for the life of me hasn’t realized I’m trans and keeps saying things like “it’s because you’re male that you do that” or “yeah, but you can pee standing up.” One day I’ll break it to her…

Would you do anything different?
Nope. I feel I chose the right surgeon as well as the right procedure for me, and it couldn’t have happened soon enough.

I wish I had been more informed about hypertrophic scarring, which is why I talk about it so much. I wish I had been eligible for a peri/keyhole so I wouldn’t have scars, but there’s nothing I can do about that one. And I’m thankful there was already such vast repertoires of information available for my frenzied research, so thanks to everyone who has contributed their time and story to those efforts. 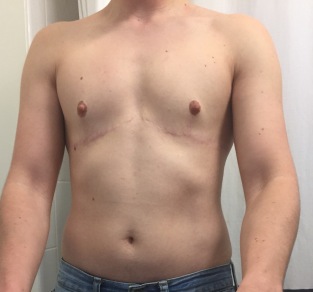 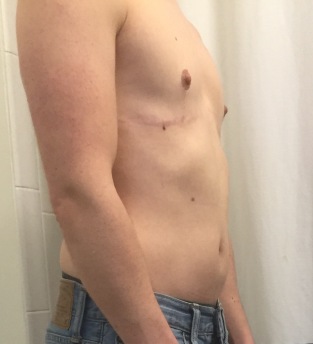 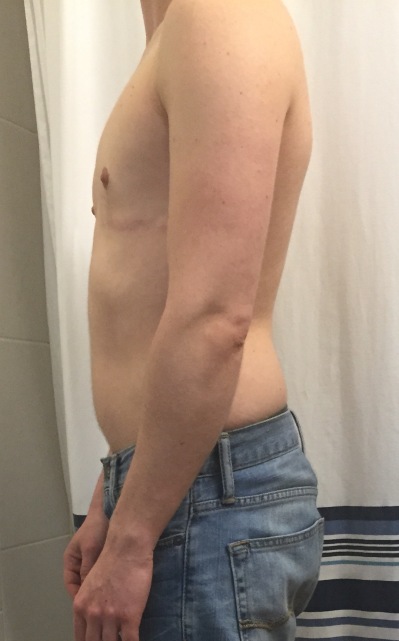