Get it while it’s hot

So I ordered my Legalize Trans* shirt and it arrived in the mail last week. You should get yours now! It’s really awesome, it’s nice soft fabric, cool design, and it fits! I got a Small or whatever the smallest size is, in red (yes!), and as you know I am a small person yet it was pretty much the right size – actually it fits better than some of my shirts. Plus, it’s an excellent way to silently promote visibility and awareness.

I wore it to work and got interesting reactions, the primary being “What’s trans?” Then people proceeded to make wild guesses: trans-lations, trans-atlantic, trans-coding, trans-fats (that one was really popular). The smart people looked it up in the internets and concluded “oh, transgender!” to which I responded with a thumbs up and a smile.

But I’m glad I managed to stir up some conversation around the topic, even if it was just discovering a word and saying it out loud, then making the mental connection that that word refers to me.

Visit Legalize Trans* and get your shirt today! 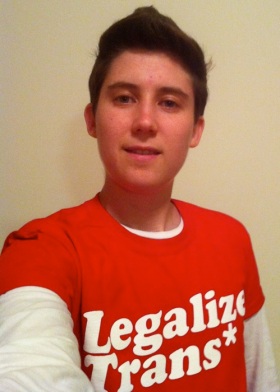