Growing up, I had always felt a little off. I simply didn’t share the interests of boyfriends, wedding fantasies, or fashion, switching early on from dresses and skirts to an odd mix of boys’ and girls’ clothes. But it took me until I was in my mid to late teens that to finally learn about other folks like me, mostly reading about men having difficulties born with female-body functions.

In 2007, my now-fiance, who I had already been with for three years (and had known me since 3rd grade), was a little surprised with my initial revelation of feeling transgender. The beginning wasn’t easy – he knew I was different; that was one of the things he liked most. I wasn’t like other girls, because I wasn’t one. He did still want to start a family, so this all was a little heartbreaking to him because I didn’t want to carry a child. But after much discussion, that was the only reason that he wanted me to slow down in my excitement. He had no problems with changes I wanted to make, and even helped me with getting several binders. Of the many ways this could have gone for us, I could not have asked for more than someone who was not afraid of letting me be happy.

Once we were out of high school and I was able to have full control of my own medical decisions, I began to look into testosterone therapy. I’d read about all the benefits and side-effects, and it seemed a done deal for me. We talked one evening about it, and to my dismay, it ended with the statement: “If that’s what it takes for you to be comfortable and happy, then that’s okay. But I don’t see you as a man. I don’t know if I ever will, and I don’t want to lose the person I grew up with.” That hit me hard, probably harder than it should have.

What I didn’t realize until a few years later was that I had jumped right in and made a sharp turn in that direction without listening to what I wanted for myself. It had been hard to restrain myself in times like this because it was so ingrained that it’s “one or the other,” and I felt I had to prove my trans-ness. After some soul-searching and speaking to a therapist for a few years I finally realized what I was looking for. I wanted some aspects of male physiology, but I was totally okay being seen as somewhere in between. I agreed to start a family with my fiance, and had my tubes tied straightaway (a hysterectomy was out of the question with the doctor I had).

After our daughter was a few months old, we picked up fitness together. We both started taking prohormones, available at some fitness and wellness stores. I wanted to try something less permanent and less radical to see if T was something I really wanted. Taking this step alleviated some of the hesitancy, since everyone reacts differently to hormone balances.

Prohormones – specifically testosterone boosting supplements – are less effective in a female body, but even just the small changes were enough to see that I did benefit from a small amount of testosterone. I felt just a little bit mentally sharper, especially on waking up – and I’m not a morning person at all! Being sleepy but able to pay attention and hold a conversation, coupled with a slight boost in confidence, it was very easy for me to see that this was something I didn’t want to lose. It also confirmed that I wasn’t going to become a different person – just a healthier, happier and more confident me. Surprisingly, it also gave me a taste of some of the more noticeable effects, like facial hair.  I actually have some stronger hairs on my chin I know weren’t there before, although it isn’t anything radical. If they bother me, I just shave them.

Prohormones gave me a very real look into what may be in my future and whether or not I could really handle these changes long-term. Now, because neither of us are strangers to my experimenting, it just leaves us with some good jokes and very open communication between us and our friends. I really do believe that this step helped us, since no change was sudden or drastic, and it gave me a kind of insight that can’t be explained in words. It’s easy to find YouTube videos of guys talking about the changes, but that experience isn’t something that can properly be felt until it’s experienced by the person in question.

Afterwards, I started looked further into hormones. Over the years, Micah’s story was one I’d run into, among many others. As I shared pieces of their stories with my doctor, I suggested low-dose T, explaining my plans to later have a hysterectomy and top surgery. I told him what I was looking for and described how I felt. Taking time to review my precise goals, along with plans for the future, and finally a note from the therapist, told my doctor everything he needed to know about which way I was heading.

Many doctors aren’t familiar with low dose testosterone as a long-term treatment for transition, and still tend to follow the “one or the other” mindset a lot of laypeople do. But although they’re hesitant, most will also be open-minded and take time to do the research. My therapist has been great – she travels frequently to visit not just psychiatric but also medical conferences for the LGBT+ community, and comes back with lots of resources. Through the process, I’ve maintained a healthy dose of reality when looking at something as life-changing as this. My research included not just testimonials and personal anecdotes, but also long-term studies done by the NIH.**

Working with my therapist and the professionals over at Metro Tampa. I’m finally starting my treatment. As long as I stay with a doctor and keep myself aware of my own goals, I don’t see any potential problems; the only speedbump left is my bloodwork.

Even in the professional world, I’m finding fewer people are truly concerned with the details of my identity, even if I don’t adhere to expectations. As an EMT, having dealt with 80 patients and more than 20 professionals, none have questioned my name, my identity, or in any way made me feel like my personal details were an interference. A few even know of my intentions to start hormone therapy. This is welcome news where I’m from, a small conservative town in central Florida. Keeping myself and the professionals working with me informed and keeping open communication with my support system has been my lifeline. 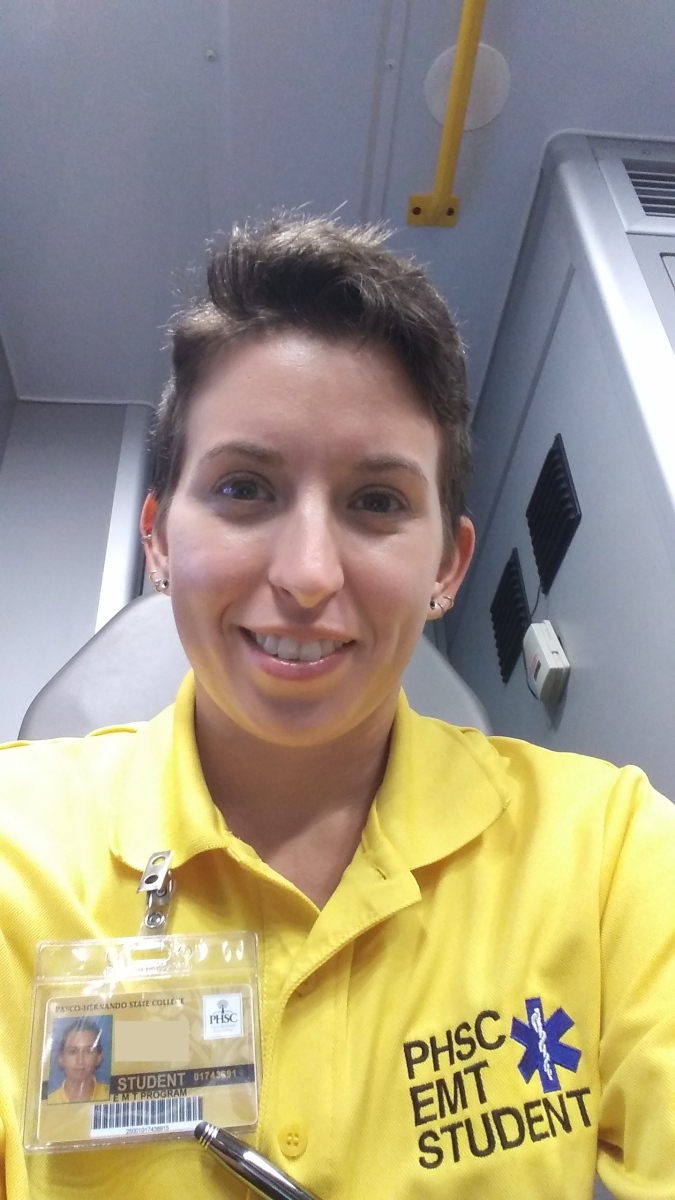 In hindsight, my fiance’s words opened me up to being genuinely happy. I no longer feel like I have to “prove” myself to anybody, something that can be challenging in a judgmental world where, even within trans informed circles, one can easily be considered “not trans enough.”

Hopefully anyone considering testosterone can keep this in mind. Don’t let anyone tell you that you are making the wrong choice. That is YOUR decision to make. If you decide T is right for you, pursue it! Maybe it’s exactly what you’re looking for. If not, then that’s fine too!  The only wrong choice anyone can make is assuming T will cure everything. T may not cure dysphoria, but it can certainly make it more tolerable. T cannot repair a broken relationship, or straighten out a difficult one, and it certainly can’t make anyone understand your point of view. As long as you are truly aware of the good and bad, you can always make adjustments and adapt. I didn’t understand this at first, and nearly lost many people important to me.

I haven’t started officially – that will be in a week or two when I’m medically cleared – but this entire process has been a total of 10 years if not more, and I wouldn’t change that knowing what I do now.

** Some studies I suggested from the NIH included those done on female-bodied cancer patients and on early-menopausal women to show possible long-term treatment options that wouldn’t necessarily interfere with my body functions or do more harm even in the presence of a malignant disease, as a higher dose may in individuals predisposed to blood or organ disorders, such as kidney and liver function, hypertension, cholesterol problems, and elevated white/red cell counts in a CBC in the absence of underlying disease. My doctor was able to use those as well as some (few and far between) treatments other doctors in the states have done for patients whose goals were similar to mine.

I’m Ashe. I’m 27, and I identify as non-binary, some kind of queer. I say that not in a self-derogatory manner, but to simply say I really have never cared much for labels. I began studying with the initial goal of entering Biotechnology due to a hearing loss I have, and wanted to help people with disabilities like mine. Unfortunately, I found the chemistry part of it went a little further than I was comfortable with. Since then, I’ve decided to start again with the EMS system, and am currently in an EMT program riding with our local fire department to get a look at how I can help people in other ways.

NN is a platform of resources and personal stories for & by the transgender community, focusing on nonbinary gender identities, run by the amazingly cute Micah. If you like what you read, support this community through a small monthly donation.