For this Featured Voices: Top Surgery edition we go to Saskatchewan, Canada, where Malin navigates the government funded healthcare system with a mix of serendipity and perseverance to access top surgery and other trans care needs as a nonbinary person.

You could say every transition in Saskatchewan is nonstandard.

We’re a large province geographically, but small in population (numbering at somewhat over one million), and if you’re not from Canada you probably don’t know we exist. Like the rest of Canada, we enjoy a public sector, tax-funded healthcare system. This is normally a wonderful thing, but as a trans person it means that I often have to wait for the government to approve funding on and establish a service before I can access it, and until extremely recently, in Saskatchewan transgender health has just not been anywhere on the government’s list of priorities.

This is why I say that every transition in Saskatchewan is nonstandard; there is no standard route to go through, and there are very few “experts” in the field of transgender medicine. I myself have not met face-to-face with a single practitioner who specializes in transgender issues during my entire transition of the past three and a half years, and I live in Saskatoon, our biggest, generally most progressive population centre.

But of course people do transition here, with various degrees of time and perseverance involved.

I had top surgery about a year ago, and have been on a low dose of testosterone for six months. I identify as nonbinary and have no plans to legally transition to male, which means that my situation has often been difficult to describe to medical practitioners. My medical journey has been a bit of a gong show even besides that; let me give you a rundown.

The first step I took was to go about getting a psychiatrist’s letter, which is as invaluable here as it is everywhere else. There is precisely one psychiatrist in Saskatoon who specializes in gender and sexuality, and it is nearly impossible to get an appointment with her because her waiting list is just that long. I was referred to her anyway, but never ended up seeing her. Luckily the psychiatrist I did get in to visit (through a referral from a GP, to whom I was directed from a guidance counsellor at my university) was helpful and open-minded, and after two or three sessions she wrote me a letter and eventually helped me find a surgeon for my operation.

Besides not seeing the usual specialist as far as psychiatrists go, the doctor who oversees my hormone treatments is an internist, not an endocrinologist, because transgender-friendly endocrinologists are also in short supply. It took over six months from the first referral that was made to get me set up with a family doctor, because the first two doctors I was referred to got booked up with regular patients (whether this was due to all of the transgender referrals from my internist I can’t say, but I wouldn’t be surprised).

My surgeon, however, was definitely the oddest part of the whole equation.

At this point, my psychiatrist had made calls and sent referral letters to every surgeon in Saskatoon (plastic and otherwise) who she thought might be willing to do top surgery. For various reasons, I wasn’t worried about getting reconstruction done, only a simple mastectomy. I thought that should make it easier to find a surgeon, but all of the calling and referrals had been met with either rejection or silence. Even the surgeon I had heard of in Alberta was no longer doing operations for transgender patients, which was a huge blow when I found out. I had heard of someone who had recently started doing top surgery in Regina (a couple hours drive from where I live), but reviews were very mixed and I was uneasy. I had just decided that I was better off waiting until after my schooling was done and saving up the approximately $8,000 I’d need to get surgery in Ontario with Dr. McLean [well known for doing top surgeries] when I got a call from a local surgeon’s office.

To this day I don’t know precisely what it was that made him decide to do my surgery. I found out that he operates out of a breast health clinic, and primarily does operations on breast cancer patients. My referral originally went to one of his colleagues and then somehow ended up on his desk.

The first day I met him he walked in, asked me a couple of questions, said something along the lines of “Well, you look perfectly sane to me, I don’t see why not,” asked me if I had any questions for him, informed me that he’d be in touch, and walked out. I was stunned. I was expecting the meeting to be at best an interrogation, and at worst an outright refusal, but it was nothing of the sort. To my knowledge, he hasn’t performed any transgender surgeries before or since mine. He asked me not to refer anyone else directly to him, because he has more than enough work with what he currently specializes in.

Now, things didn’t all go perfectly from there. It was about nine months after that first meeting before I actually went in for surgery (I was expecting three months from our talk), partially because he wanted to consult with a plastic surgeon who apparently got cold feet about the whole thing. But the surgery itself went very well, and healing went even better. Getting surgery in Saskatchewan instead of out-of-province also meant that I didn’t have to pay any money for it, which is a huge deal.

There are a few things I regret about the process. I set out intending to tell the truth about myself. I didn’t want to pretend to be binary, or lie about my level of dysphoria, or do any of that just to get treatment. The way I saw it, I was in a position to be a trailblazer. I could educate medical professionals about nonbinary transition as I went, and hopefully leave the environment a more positive one for other people like me after I had made my rounds. But I didn’t always stick to that.

I was regularly evasive about not wanting nipples, for one thing. I was worried that I wouldn’t be able to explain it, and perhaps I still can’t exactly. To me, a flat chest with nipples would be like a male chest, but a flat chest without is like neither gender. That’s far from something I hold to be universal, but it’s how my body feels to me, and I was worried that if I tried to explain it that way I wouldn’t sound transgender, just crazy. So I said that I “didn’t care” about my nipples instead of expressly saying I didn’t want them. 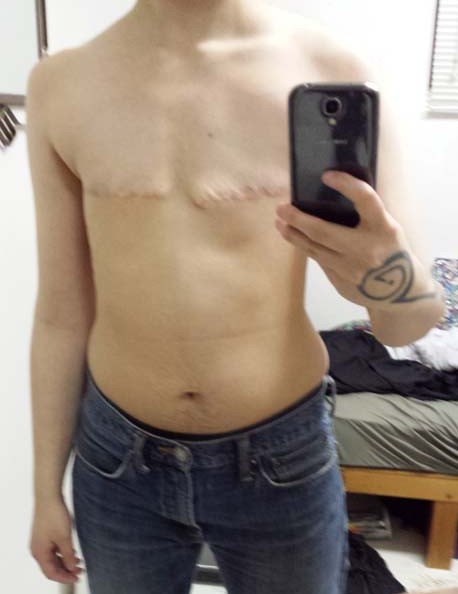 Worse than that, I never told my surgeon that I’m nonbinary. The letter from my psychiatrist was purposefully vaguely written, given my not being sure specifically under what future contexts I might have reason to use it. Despite the fact that it was always something I intended to be straightforward about, by the time I had met my surgeon I was feeling exhausted. I couldn’t handle another letdown. So I never said I was binary, but I also certainly didn’t say otherwise.

Things have been getting better here though. I know other nonbinary people who are transitioning, some with more ease than I have. I know someone who has top surgery lined up with a different surgeon here in Saskatoon. Recently, the Saskatchewan Human Rights Code was updated to add gender identity to its list of prohibited grounds for discrimination, and in the last couple of years the provincial government has been doing consultations with transgender people to identify areas in need of improvement in the health care system.

I owe a lot to organizations like TransSask Support Services and OUT Saskatoon for the vital outreach and support work they do in the province. The first support group I went to was hosted by OUT Saskatoon, and TransSask maintains a list of transgender-friendly doctors and other specialists that has been incredibly helpful, to give you an idea of a small piece of what they do. Both organizations are very supportive of nonbinary identities and other nonstandard transgender narratives as well, which was a relief for me when I found out.

So today I’m comfortable with my body (astoundingly), seeing a GP regularly, and feeling pretty optimistic about the future of transgender health in the place I call home. Perhaps all the more so for the somewhat strange series of events by which I got here. Despite the lack of institutionalized support, it seems I’ve ended up with a lot of people playing on my team, people who helped make my transition happen despite the odds. I find that pretty heartening.

Malin is 24 years old, sort of fidgety, and not very good at maintaining eye contact. They like drawing weird pictures and eating canned spaghetti. 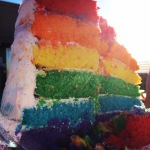 Contribute at patreon.com/neutrois to the growing movement of non-binary enlightenment and rainbow cake.