Following the launch of Featured Voices: Top Surgery is a story about someone who is comfortable in their breasted body, and uses this to challenge society’s norms about what is shameful, obscene, or beautiful.

In Letters for Leslie, a young queer pays homage to warriors who came before us. With captivating rawness and a lyrical flow bordering on poetic (sometimes veering into full-on poetry), the legacy of Les Feinberg acts as Emily’s soundboard for exploring broader trans/gender advocacy, as well as personal reflections.

I didn’t know I was breaking the law when I sat on a wooden bench with my shirt off outside Oregon State University’s library last spring. Social norms, sure. That’s why I was doing it. It was the main vision for my Gender, Sexuality, and Photography class portfolio. But coming from Portland where I think a person can legally walk around in a g-string and be okay (I’ve actually only seen this once outside of the annual naked bike ride…wondering if I should doublecheck this law), I had figured Corvallis wouldn’t have a law against boobs on the books. I was wrong.

Around the time I posted one of my shirtless library photos on Facebook (which was received with enthusiasm, flagged by someone for obscene content/nudity, but ultimately not removed), I looked up the boob ordinance and realized I could have been arrested and fined $500. I snarled. Like a splinter I’ve had all my life, the criminalization of my body rankles. I can still feel the pang of my bare-chested nine year-old self eagerly bobbing for apples at my birthday party after a friend whipped her own shirt off. I had glowed with adrenaline at flouting such a silly rule about shirts. My other friends and family had been silent and I felt them waiting for me to feel embarrassed. Sometimes I still feel that day’s self-doubts flitting against the splinter.

As you know, in much of the United States, (cis)girls and other breasted individuals are raised to be ashamed of their bodies. Images of breasts are everywhere, but almost nowhere, almost never, do we get to see cis-women and other individuals with breasts get to do things breast-less people do without being sexualized and shamed.

I don’t identify as a woman, Les —you know that I’m genderqueer—, but my boobs are a part of me. We’re in it for the long haul, and we don’t mind ruffling feathers if it causes other people and institutions to rethink harmful social norms. No person, regardless of their gender, should be shamed or criminalized for having breasts and doing something as simple as sitting on a park bench enjoying the sunshine, reading a book, or bobbing for apples. No person, regardless of their gender, should be shamed for their body. My body isn’t dangerous or obscene. I don’t think any human’s is.

I’ve spent some time wondering why my gender dysphoria usually doesn’t extend to my body. After Raye explored their feelings on binding, I thought further about my own trans body and why I’ve never felt seriously compelled to bind my own chest. My brain churned. During free minutes at work, I scribbled thoughts on a Sticky note.

I’ve really only ever had a binder because my best buddy sent me their old one in the mail a couple years ago. It was white and looked like an Under Armour tank top with a tiny pink stain. A stain unless I’m just remembering my smashed nipples.

While staring at my slightly compressed self in the mirror that afternoon after unwrapping the package and squeezing myself into the tank, I made a startling discovery:

I was uneven. Asymmetrical. I hear this is standard but I’d had this chest for 21.5 years and had never realized that one areola was a smidge wider than the other and one boob was a bit larger and higher. Under the sheer layer, this became clear. I stared.

I had already known I preferred the left side of my face (nothing against the right, I swear), but this was new. How could I not know this about the chest I at least glanced at every day? Also, why was I trying on this binder? What did it mean to me?

The binder was too loose to do any significant binding but I wasn’t actually disappointed. I ended up tucking it away to donate and never wearing it again—except to doublecheck the feel and make faces at my asymmetry in the mirror.*

Unlike my buddy with large breasts and significant dysphoria, I’m a slender human with small breasts and fairly narrow hips and I’m quite content with my body. It offers me some grief, sure, but I regularly give thanks for how small my boobs are—they travel easy. I’m a fast walker, athletic, and carry enough tension in my neck, shoulders, and back without boobs weighing me down. I also don’t connect with popular images of breasts—the sexiness, or the utility; I generally don’t want to play up my sexuality with my breasts nor do I see myself ever breastfeeding babies. I can feel sexy in a tight sports bra or lace bra, but generally disregard my chest. Still, I like having that softness.

My contentment with my boobs has many reasons. For one, I’m self conscious of my slenderness insofar as it affects my ability to give good hugs; I worry about causing others discomfort with my boniness. I’ve been told this is a ridiculous concern. Yet because tight hugs with flatter-chested folks can hurt me (hold on, nips!), I’m thankful I bring a little softness to my hugs.

Another reason I’m pleased with my chest: I got my nipples pierced last May and I feel like a champion with my barbells. The piercings make me want to go topless more often, but alas, it’s cold and location doesn’t always invite that. I almost wish I had already been pierced when I sat topless in front of my university’s library last March. At some point, I’ll have to do a piercing update in a non-university setting. Still a fan of posing with a topless magazine in a grocery store. Shock and awe, Les.

When I think about having a completely flat chest, I’m unsettled. I like what I’ve got and don’t think a flat chest should signify androgyny. Why is it that no boobs is gender neutral?  This measure of androgyny is male-normative and decidedly less inclusive of communities with curvier/larger bodies. I’m not cisgender and I should not have to do anything to my chest for that to be more evident.

There are countless transgender experiences and it should be noted that a person doesn’t have to experience discomfort with the parts they were born with to be transgender. Regardless of whether a person is a trans man, trans woman, nonbinary, etc, they do not need to change their body or feel compelled to do so if they don’t want to. A man deserves to feel happy with his breasts and vulva if he wants to; he’s no less a man. Neither is a woman any less a woman if she has a penis. Similarly, genderqueer, genderfluid, and agender individuals deserve to have their identities honored regardless of the genders they were assigned at birth and the ways they prefer to present themselves.

There are many reasons why a person may or may not choose to bind or pad their chest or undergo top surgery. Emotional and physical health reasons, as well as financial.

You and countless other trans individuals, especially drag queens and drag kings like Peaches and Jess Goldberg in your Stone Butch Blues, were regularly arrested in bars and brutalized for not wearing enough pieces of men’s or women’s clothing in the 1960s. You and Jess both refused to conform. And while the memory of Stonewall has been coopted by the mainstream white, cis, gay and lesbian movement, it was gender outlaws who led the Stonewall Rebellion in late June of 1969. Miss Major, Marsha P. Johnson, and Sylvia Rivera, black and Puerto Rican trans women, queens of themselves, led the fight. So many queers today owe our thanks and much of our wellbeing to their refusal to desist.

In my own way, in my own gender outlaw identity, I refuse to conform to the shame or sexualizing society puts on women and breasted folks for having breasts and I reject the notion that having breasts makes me less nonbinary or queer. I owe this love and fight to the gender outlaws who have been erased by both mainstream culture and mainstream LGB(T!) movements, and to my nine year-old self looking for assurance that my bare-chested joy was natural and okay. I’ll break my own city ordinances and social norms at times, come what may.

*For the record, I scrutinized my boobs for months afterward and eventually ceased noticing any unevenness. Maybe the binder just brought it out of me. Either way, what’s it matter?

Emily Gritz (who goes by Emily or Gritz) is a writer and book bartender in Portland, Oregon. 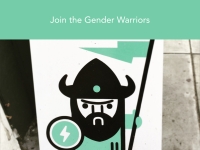 Join the #GenderWarriors and promote visibility of non-binary voices. For warm feels and infinite rainbows, contribute at patreon.com/neutrois.