Today, April 23, is my birthday (don’t worry, I scheduled this post beforehand, I’m probably out celebrating right now). I share this day of birth of William Shakespeare, Shirley Temple, and other famous people who have Wikipedia articles. I am now 25 years old, and looking younger everyday. It’s also almost exactly two months since my top surgery, and as a mish-mash-all-in-one I’ll share my birthday presents and my recovery.

Although the doctor said “6 weeks” as a timeframe to full recovery. By 6 weeks my body wasn’t ready for anything but light running. However, at 8 weeks I am almost back at capacity. Last week we had a company outing to Paintball, where we all got nasty sunburns and gleefully shot hard pellets at each other. I did wrap my chest and wear a chest protector, but all in all had no pain or discomfort – except that my legs are still burning with soreness. While yoga and rock climbing are still off my list, I expect to start those up again in about a week. That’s mostly because my gym membership is suspended until May 1st, but also because I don’t feel quite ready for such strenuous chest-heavy activities.

Also last week I got around to playing Rockband again – my first time back on the drums since top surgery. In case you didn’t know yet, I’ve been an avid (hardcore) Rockband drummer for about two years. Apparently my skills did not take such a big blow during my hiatus, and I managed to unlazy myself and shoot a short video. Despite messing up a lot, and getting hella tired really fast, the video allows you to fully appreciate my recovery status.

Now that you’ve had a glance at my obsession, you’ll appreciate the most awesomest birthday present ever. Take note of the elves building it in the background. 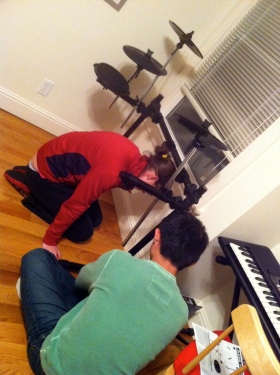 That’s right, it’s a full on electric drumset. What’s more, there’s a module that plugs into the PS3 to play Rockband with it (which is in delivery). No more plastic pads for me – it’s real drumming from now on! That coupled with real bona-fide music lessons may just graduate my drumming from a game to a hobby (or more). I’m thrilled!

Last June was the moment I definitely made up my mind to have top surgery, and I resolved to do it before I turned 25. It was an arbitrary deadline, but it was necessary it to make things happen. There are few things in life that I really truly want, but when one presents itself, I do everything in my power to obtain it. This was one of those few. I didn’t magically end up on the operating table – I worked hard, saved up, did my research, dealed with my family, and most importantly, made up my mind. And the effort payed off. The time period shortly before and after the surgery I went through major hesitation and self-doubt. Two months later I can say with absolute certainty that this was the best decision I ever made.

To some degree I know that for me top surgery was a straightforward and fairly simple process. I recognize that for most people this is not the case, with surgery or identity or anything else. I wish there were some way to make it easier for others. Writing about it is my very small attempt to try. In two months I’ve seen tremendous growth in myself and my readers, and hopefully we can continue to learn from each other.